MY MIND WILL TRAVEL

WHERE MY BODY CAN’T GO *

Hanna, we’ve known each other for a while. When I decided to leave the Amsterdam art world a few years ago to focus on permaculture fulltime, we continued our conversation. talk. Even when our professional relationship changed.

Well, I value having conversations outside of the art field. Because of your permaculture practice, I felt the freedom to focus our creative exchange on nature and my / our relationship to it. It enables other perspectives in my work and adds a different layer to it. We have this investigating attitude, a joint curiosity about our relationship with nature.

Painting through a lock-down

We share a sense of marvel.  Look at this place! What kind of a planet is this? This interview is a framework for our dialogue. Let’s see what might emerge from this, or maybe not. It reminds me of how you paint on your negatives. You invite chance, you look for coincidence, and create a tension in which coincidence is under control.

Absolutely. Chance plays a big part in my photography. I have been investigating this in other media as well. I have been painting, performing, and writing in recent months.

Due to the Covid lockdown, I started painting on canvas. I had not done that before and it’s a whole different scale than I was used to when using a miniature brush on photographic film. I should have travelled to Mexico City in April for an Artist in Residence program. But obviously this was cancelled. I work a lot from my studio in Berlin, investigating materials and techniques. But the actual works are usually created while travelling. Being outside of my comfort zone allows inspiration to emerge. But there I was, stuck like everyone else. So I took up painting just because it’s so awkward to me. I created a same kind of shock-of-the-new for myself. I don’t know much about painting. I don’t even know what I’m doing is any good at all. I am walking on unknown territory.

“With painting I have to start from scratch. ” 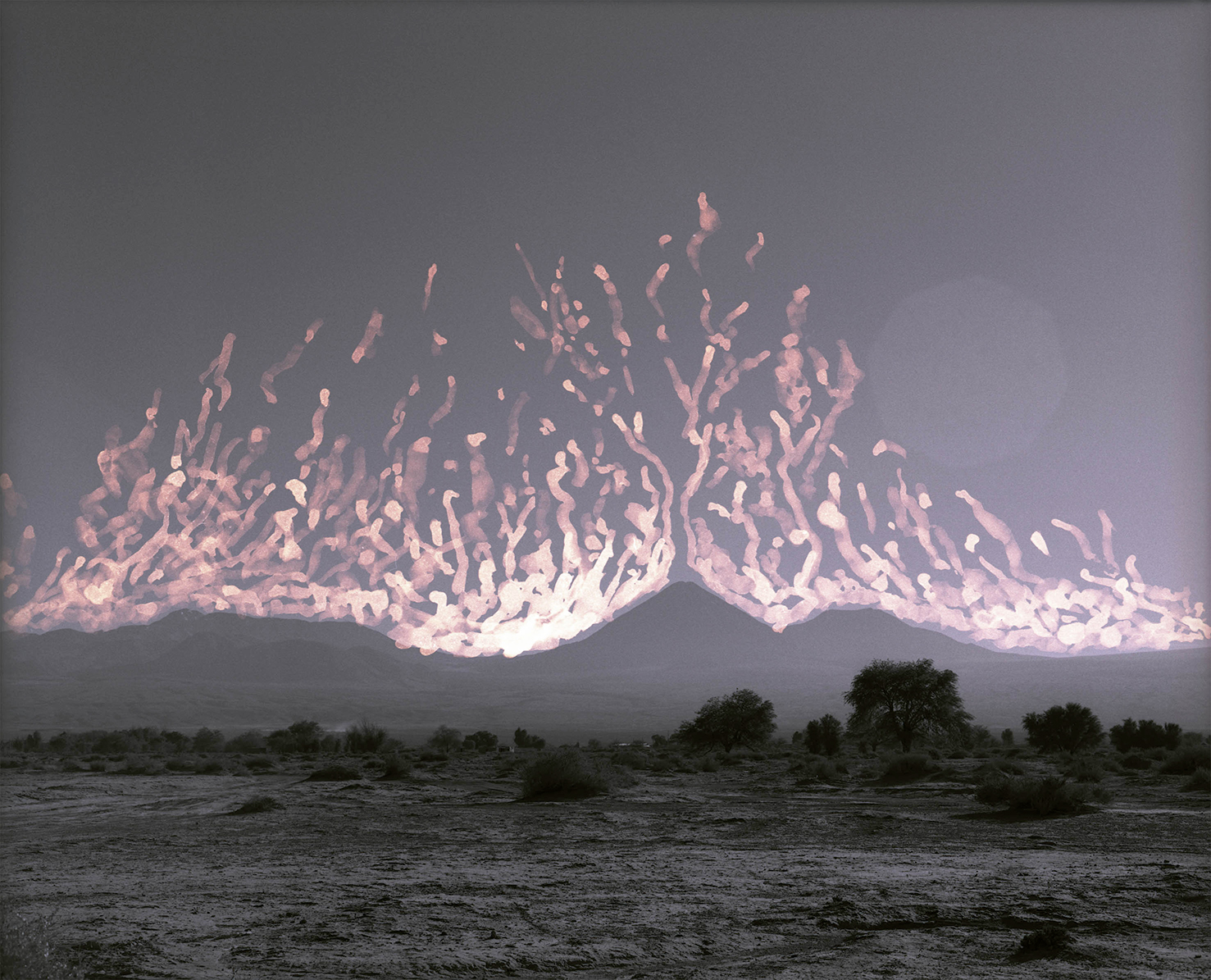 The role of chance

After a while, I asked feedback from befriended painters. And they replied, “Should we really tell you how to paint? Chance and the quest to find out how things work are such an important part of your process.”

So I was thrown back to myself. I felt clumsy with the materials, –   reminded of my first attempts to paint on photographic negatives. It takes time to find your way and I had no references. In early film techniques painting was done on film material, but you don’t actually find that in photography: at most painting on a print, but almost never on the negative. I wondered: what is the role of coincidence for me? In Mapping My Hollywood  I once shot a sunset without being technically capable. A friend who was at the scene wanted to explain, but it felt wrong. I needed to know what would happen if I did it my way.

It’s interesting by now I know what I am doing in photography  -when to allow chance to play its part, for instance by not using the proper technical approach. But with painting this feels very premature. There is no controlled chance. At this moment everything is randomly happening in a way.  That makes it very vulnerable.

Feedback from others helps me to see my work with different eyes. At the academy, I sometimes had up to 10 versions of a certain photograph, because I couldn’t decide which one was best, which one was the one? Later on I became more and more confident in that process. I know how to invite that tension. 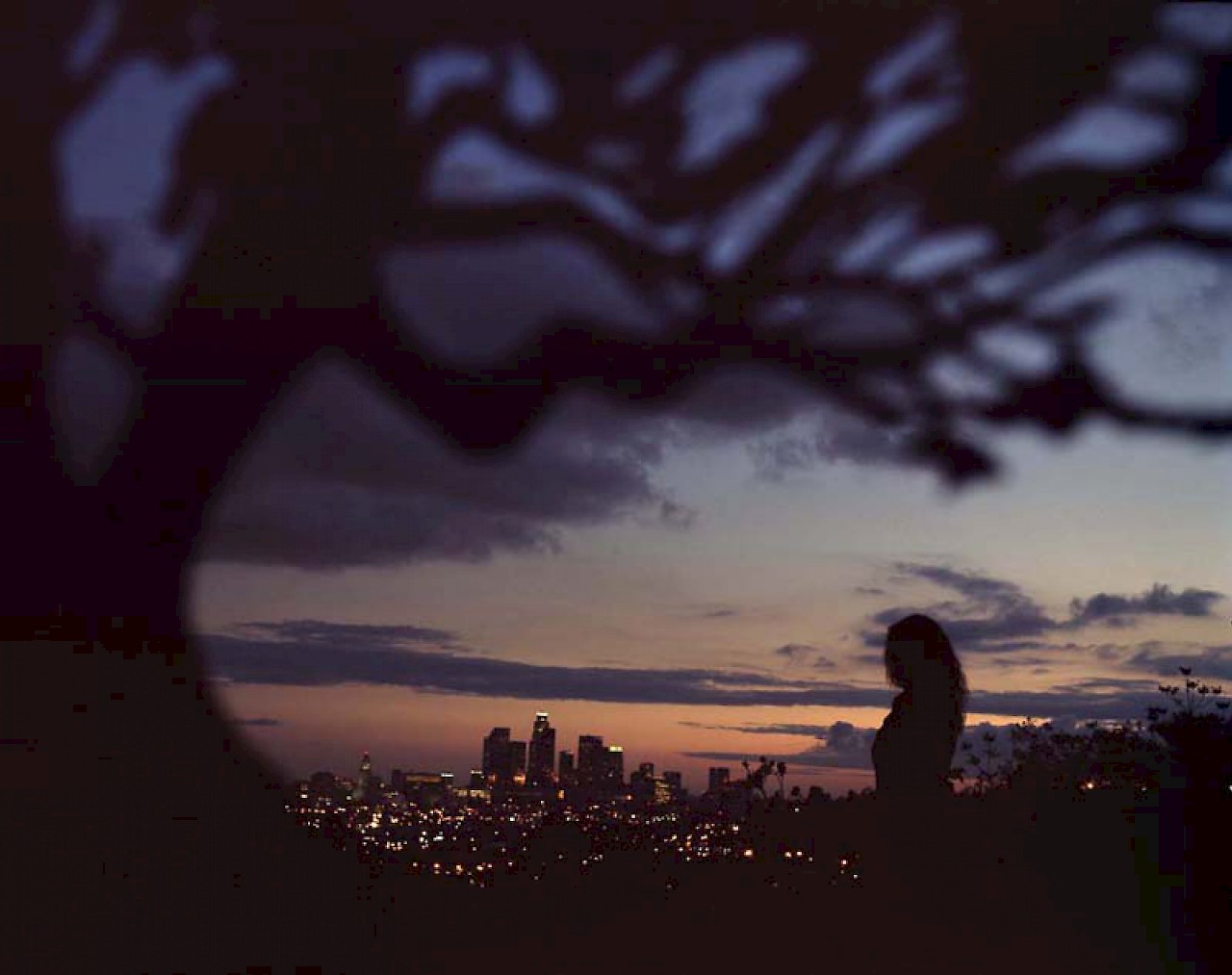 Gone with the wind  2007 – Mapping my Hollywood

I have to feel the image

You don’t know what to expect, whether something good will come out of it. Still  you want to spend your time exploring that unknown area.

It kind of grows from former work. I’ve been painting on photographic emulsion foreight years since Searching for the Cold Spot, the first book of my trilogy. That project has its ultimate form as a book.  The images have rhythm and a tactile quality that remind me of paintings. And when we made an exhibition with images from the book, I decided to enlarge them to 1,60 x 2 meters. The effect was impressive. It was almost impossible to tell if they were paintings or photographs. I wanted to explore this further.

The images from The Lunar System have this independent quality, even outside the book. Again, it is always important for me to work with my hands, to use the analog process, its tactile and sensory aspects. I create the same feeling by photographing myself, appearing in my images. It makes me feel connected to the landscape. Interestingly, I cannot achieve this if I use a model. I have to feel it myself.

“It was too beautiful to be good” 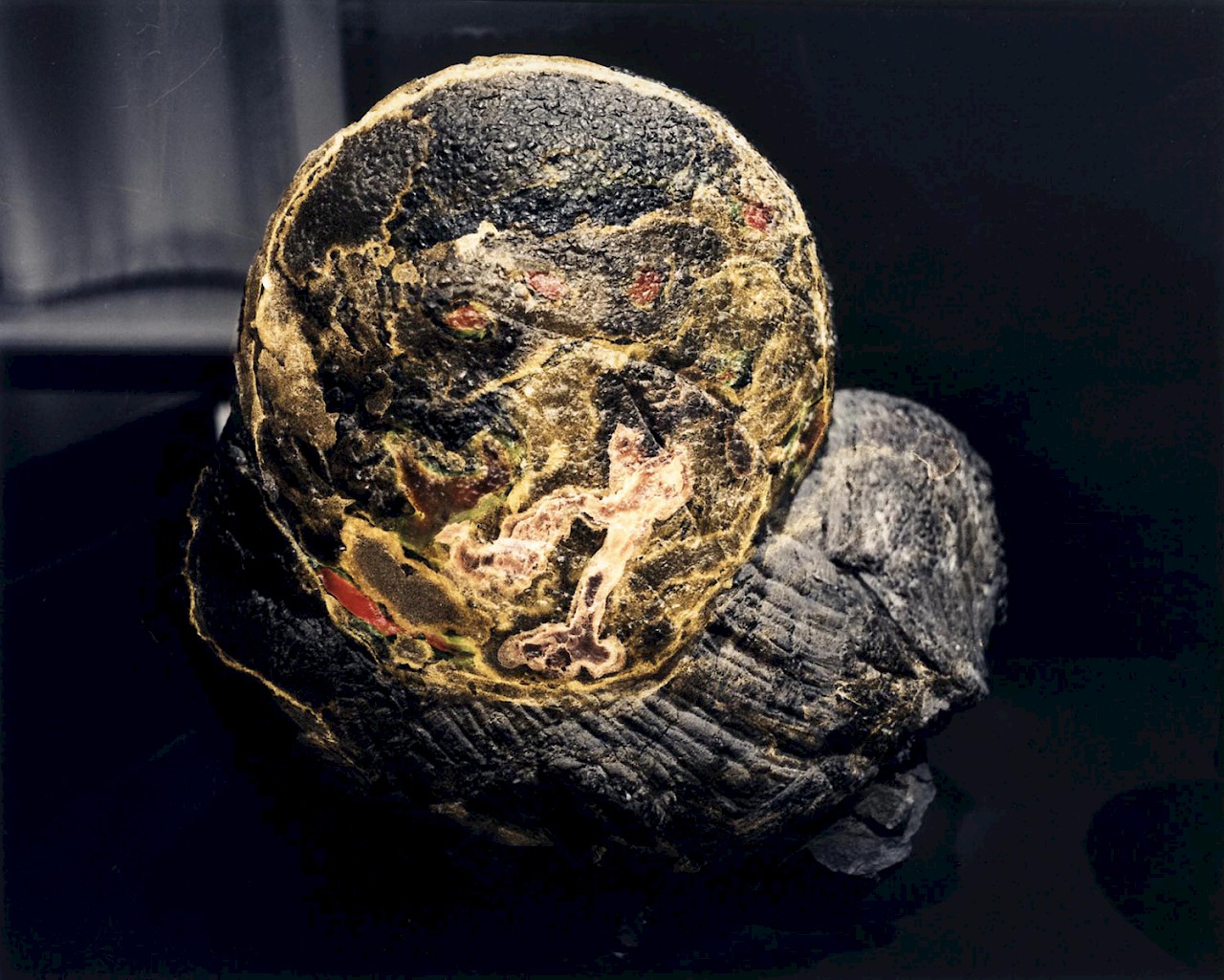 At this moment I work a lot with language. I write prose and poetry, but I also integrate words and sentences into my paintings. I first tried to do that with an old typewriter when working on The Lunar System, but it was too beautiful to be good. It didn’t work.

One of my stepfathers who makes animation films and who taught me early on how to draw on celluloid, reminded me that I don’t have to put the words in one single image but that I could use the whole film instead. So I started experimenting on filmstrips. Language is very important to me right now.

The illusion of photography

This interaction with the outside world is important but it also enhances your vulnerability. So who are your mirrors at such moments?

Sharing my work with others during the process resembles personal development. It teaches me about what I want to show. At some point you know who you can approach for “vulnerable” feedback. A number of people are extremely important to me. Indeed  mirrors, which I have chosen myself.

In 2009 I shared a studio with an artist in Berlin. He needed a lot of space to make large-scale installations.  I just started working with a new process in which I pinched holes in cardboard and create illusions by putting light behind them. A misplaced comment on his part about my experiments inhibited my process. Later it became obvious that sharing the space was not a good idea. It slowed me down. Two years later, in New York, I picked it up again and created nocturnal cityscape illusions with cardboard and light. I never took photographs in New York, but I reconstructed the city from my studio, and captured its illusion. And those became photographs. 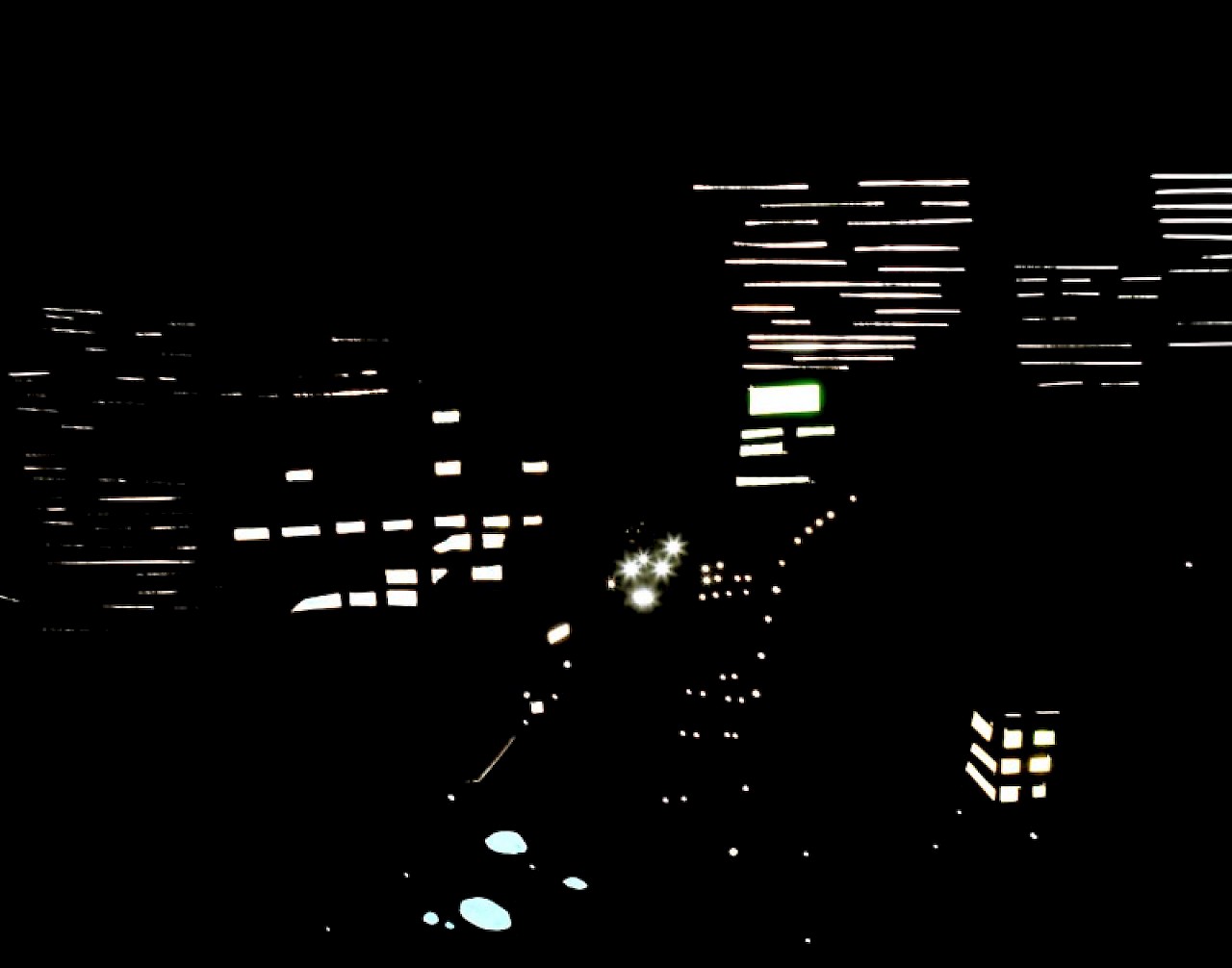 When it was shown in New York, people asked: Where in Manhattan did you take this photo? While I had not taken pictures of actual situations at all! I conjured up an illusion of a place. I was stunned. Haven’t we had that discussion about photography as a reflection of reality for 150 years? How can people still accept it that way?

This made me decide to take it a step further. I photographed and filmed landscapes where all kinds of strange events happen. This resulted in the series Encounters. It had the same effect on people! I used imagery that is part of our collective imagination. Even practiced viewers accepts the suggested reality in my pictures. I’ve learned to navigate this kind of imaginative, magical imagery. 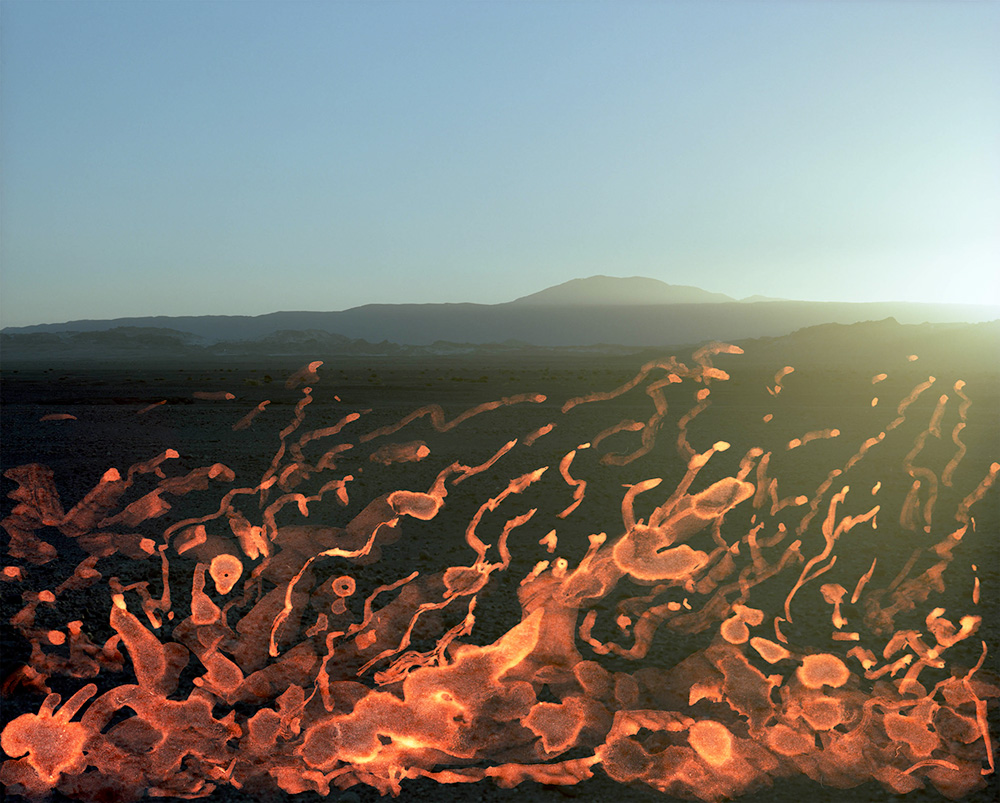 The Lunar System added your personal universe. And you’ve added poetry and prose.

I went to a residency in the Atacama desert in Chile. I didn’t know much about the place. ‘Valle de la Luna’, the valley of the moon, which resembles a lunar landscape, and the fact that there are many observatories due to dryness and little light pollution intrigued me. Since my series Encounters, I have been working with cosmology and when I learned that this residency would include a visit to an observatory, I decided to go.

We were given tours of the land; we learned about the animals and plants from the indigenous people of this area, who, as in other parts of the world, are under enormous pressure and have been minimized over time. In the first week, one of our native hosts wanted to get to know us and asked where we came from and whether we had a partner or were married. We thought the latter was quite a remarkable question. Many people stumbled over it. The answer was often “complicated”. My answer was crystal clear: ‘My love is so big that I can think of him, speak about him and I know he can feel it on the other side of the world in a different time zone, even if we are not in touch.’ ‘The kind of love that will exist in the universe for all eternity,’ concluded our guide. That was a very special moment in that group.

This small conversation pulled my personal story into a larger whole; it became part of the cosmos. I had previously toyed with the idea of doing something with my personal cosmology which I had earlier invented as a kind of game. Now the pieces fell together: the landscape, the cosmos, my place and that of my loved ones in it. My mythology and that of the indigenous people of a place that resembles the moon. The landscape helped me shape this. 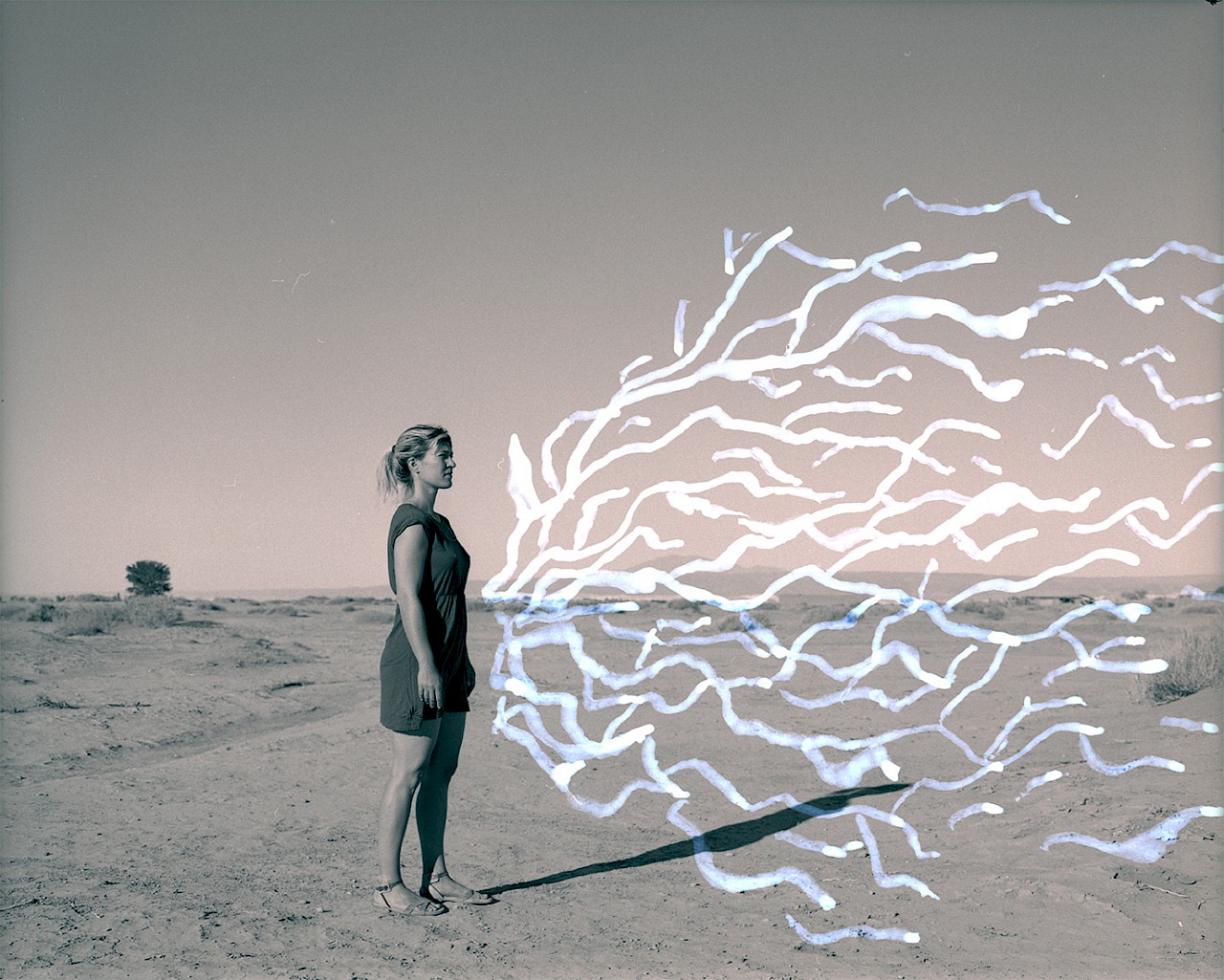 You are two books into your trilogy. Do you have an idea of what the third one will be about?

I try to be open to changes and chance. Language plays a role. The fact that I could not go to Mexico and I explored painting through the Covid lockdown, is one thing. But I am not sure it will be part of the book. In fact, I have no idea where I am going with that. I just try to follow those interests and projects when they present themselves.

But still I am working on the last part of the trilogy of which Searching for the Cold Spot and The Lunar System are the first two parts. The forest is central to it, and love. I am writing poems and I might integrate an exchange of love letters with a man who lives in the woods in the US. It is not a traditional relationship between two people. There is a huge distance in more than one way. The forest is our connection. At the moment it provides a lot of material to think about. Maybe it will be a book, but maybe it is a poem or just an experience. I never know in advance.

The Lunar System can be visited this summer by appointment at Earth Based Art Space in Zutphen.

On August 18 a private performance will take place in which Hanna Mattes will recite her prose poetry accompanyied by jazz cellist Ernst Reijseger.

* “My mind will travel where my body can’t go” – is a Jimi Tenor song. An appropriate title in these unprecedented times.